Now Lives Mr. Olson recently moved from Los Angeles to a three-bedroom apartment in Greenpoint, Brooklyn, which he shares with the denim guru Shawn Joswick.

Claim to Fame As the progeny of the skateboard pioneer Steve Olson, Mr. Olson first learned to ride at age 12. By 19 he was skating professionally, giving him the rarefied distinction of being the first second-generation professional skateboarder. He often appears on the covers of Skateboarder and Thrasher magazines, though these days his clothing line is also getting attention from fashion editors. 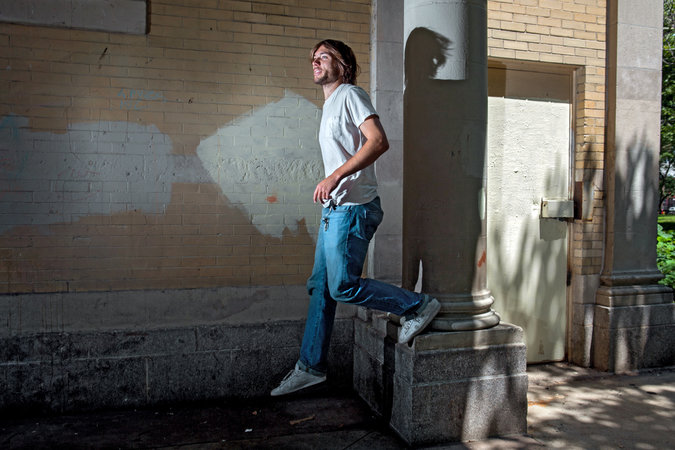 Big Break In 2005 he signed a sponsorship deal with Girl Skateboards, one of the most prestigious skate companies. “As a kid growing up, I never thought I would get sponsored by them because they were at such a higher level,” he said. Still, larger brands came calling. A few years ago, he parted ways with Girl Skateboards to work with Louis Vuitton, Vans and his current sponsor,Nike.

Latest Project Last year he started Bianca Chandôn, a unisex clothing line that is sold at boutiques like Supreme and Dover Street Market. The streetwear label was inspired by the inclusive philosophy espoused in early issues of Purple magazine, house-music havens like Paradise Garage and 1970s-era Fire Island as seen through the lens of the photographer Tom Bianchi. (A T-shirt from his first collection has the word “lover” written across the chest pocket.) “Everyone was wearing fitted clothes and had good style back then,” Mr. Olson said.

Next Thing Disco’s social history serves as a creative catalyst for more than just his clothing line. This fall, Mr. Olson will release a dance EP in a collaboration with Paul Takahashi of Sarcastic Disco and the composer Alberto Bof. “It’s like an early ’90s dance record that feels modern,” Mr. Olson said. He also plans to release a full ready-to-wear collection for Bianca Chandôn. The sales strategy is inspired by pioneering D.J.s like Larry Levan, who released limited-edition vinyl bootlegs of popular hits. “By producing low numbers of each piece, if it sells out at a store you have to find it some other way,” he said.

Freewheeler After watching “Paris Is Burning,” the 1990 documentary about drag-ball culture, Mr. Olson noticed a similarity between the rule-breaking worlds of vogueing and skateboarding. “Some people consider skateboarding a sport, but I judge it more like dance,” he said. “Skating is like voguing: Whoever has the best style wins the competition.”