Are tattoo artists right to refuse to adorn necks and hands?

Are tattoo artists right to refuse to adorn necks and hands?

When Jane Marie, a woman in her late 30s, walked into a tattoo studio on a Sunday afternoon in early summer, she was expecting to walk out with a tattoo of her daughter’s name. Marie, however, was outraged to learn that tattoo artist Dan Bythewood refused to grant her request because of the placement of the tattoo – on Marie’s neck.

Bythewood explained that the studio, New York Adorned, had a policy not to tattoo the hands or necks of people who weren’t already visibly tattooed.

Although tattoos have shed much of the stigma once attached to them, their rapid rise in popularity has opened up a new set of challenges. Tattoo artists are finding clients are asking for images or placements which might be problematic. As a result, artists walk a tightrope between respecting a client’s wishes, and maintaining their professional integrity.

“Every artist has his or her own politics and belief system within tattoos,” Matthew Marcus, owner of Three Kings tattoo studio, says. “Whether it be hands and necks, or it’s the type of imagery. What do I do if someone comes in and they want a racist tattoo? Or a sexist or homophobic one?”

Three Kings, which has locations in Manhattan and Brooklyn, doesn’t have a rigid policy on hand or neck tattoos. Marcus says he leaves it up to his artists to make their own choices about what they’re comfortable tattooing.

“What a lot of people don’t realise is that when people say no to something it’s because of their comfort level,” Marcus says. “You should actually be thankful that they’re telling you that they might not be the best person to do it.”

Marcus himself tattoos hands or necks. He says he’s happy tattooing anywhere on the body, in fact. He draws the line, however, at portraits. He says they scare him.

“The idea of tattooing someone’s child’s face on their body and the chance of messing that up? No thank you.” 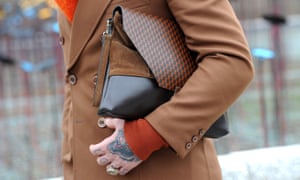 At Into You, a well-known tattoo parlour in London, owner Alex Binnie has a similar policy of leaving it up to the individual artists to make the call. “I hope my artists will look at the whole situation – who is the person, how old are they – and make a decision based on that,” Binnie says.

Into You used to have a much stricter policy, at a time when hand and neck tattoos were more taboo. Binnie got his own neck tattooed in the late 1980s. “It was considered outrageous then,” he says. “The only people who had neck tattoos then were, generally speaking, tattoo artists. It was the mark of a tattoo artist.”

Marcus agrees, saying that when he first started getting tattooed 15 years ago, heavily tattooed people and visible tattoos were few and far between. “If you wanted a hand or neck tattoo and you wanted to represent yourself in that way, you had to understand that you’re accepting a very different responsibility for the role that you were playing in society from that point on.”

Binnie says he thinks the permanency of tattooing is one of the reasons it’s so popular right now. “People want to be able to feel something in the increasingly transient meaningless of contemporary society. It makes them think ‘I really do feel this’.”

Andrew Timming, a management professor at the University of St Andrews, says that 40% of US households have a least one member with a tattoo. Timming cautions, however, that despite this rise in popularity, visible tattoos may still be an employment hindrance. Timming has studied the perceptions of recruiters towards visible tattoos and found that they are less likely to secure employment, especially in customer-facing jobs.

Leaf Chang, owner of Brooklyn’s Gnostic Tattoo shop, also thinks its for the tattoo artist to make a call whether or not to tattoo. “I definitely do not think the client should expect to get whatever they want in a tattoo shop, just like you wouldn’t go to the tailor and presume to tell them how to cut your suit,” he says.

Chang says he assesses hand and neck tattoo requests on a case-by-case basis. He says it’s the artist’s prerogative to not tattoo something they’re not comfortable with, because their reputation is on the line. “Our name is attached to our work,” he says. “So we have just as much of a stake in your tattoo as you do.”

Marcus says that while he may not agree with every tattoo idea, it’s his job to educate them about the implications of their decision. “I try to let people see all angles of their decision” he says. “If they still want to go ahead and do it after that, for me that’s where my responsibility ends.”

It has long been argued whether tattooing is an art form or not. Marcus, however, isn’t interested in getting caught up in that debate: for him, people get tattooed for various reasons and one is no more valid than another. “Sometimes you’re making art on somebody, and sometimes you’re just doing a tattoo.”

Commentaires sur Are tattoo artists right to refuse to adorn necks and hands?