Models have urged MPs to consider tougher rules for the fashion industry, describing catwalks full of models with advanced eating disorders, some surviving solely on popcorn.

Rosie Nelson, whose Change.org petition calling for new laws for health standards in the fashion industry has attracted more than 110,000 signatures, told the all-party parliamentary group on body image that she had constantly been urged to lose weight, with one agency saying she needed to be “down to the bone”.

“Friends at shows saw models who fainted and had to be dragged off the stage, quickly replaced by another girl,” the Australian-born model said. “At one stage, all I ate was fruit and vegetables, nothing else. One girl I knew only ate popcorn.”

The committee, which is chaired by the Conservative MP Caroline Nokes, is considering pressing for legislation. It heard from models and agencies for both traditional and plus-size models, as well as health experts and the models’ union, on whether Britain should follow countries such as France, Spain and Israel, which have rules to prevent models with eating disorders being used on catwalks and in fashion spreads.

Nelson, 23, told the MPs she had been turned away by British agencies for not being thin enough. “I went back after I lost weight, and I was told I had to lose more. I couldn’t physically have lost more weight at that time. And it’s upsetting that 16-year-olds could, at this very minute, be being told the same thing.

“Every time I went into an agency, I was prodded and poked and measured with a tape measure,” she said. “I used to dread it.”

The founder of the modelling union at Equity, Dunja Knezevic, a former catwalk model who once developed hypothermia on a fashion shoot, told MPs it was not unusual to see extreme symptoms of eating disorders at shows.

“I saw queues of girls at Milan fashion week with this fur all over their bodies, what the body produces to keep warm when there is no fat left. They were covered in it and I was just mesmerised by how hairy they were,” she said.

“It is not true that girls who are unhealthy don’t work. Some agents like that unhealthy look, with drawn cheekbones, and make-up can cover up any effect on your skin that an eating disorder could have.” 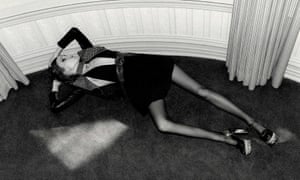 Knezevic called for a crackdown on underage models on the catwalks, whom she described as “cheap labour, 14-year-olds from Siberia who come over, are paid badly and end up even owing money to the agencies because when they grow, develop into women, they can’t fit the sizes”.

The Bosnian model, who has developed a fashion industry code of conduct with the artists union Equity, said she had never herself been told to lose weight. “I was always naturally very small, my concern was always for my friends.

“A voluntary code [for model’s health] will not work,” she continued. “Of course the industry knows the effect it is having, but it doesn’t care, it likes being the ‘glamorous bad guy’.”

But modelling agencies were defiant at the meeting, with one top agent insisting he had seen only two girls in 15 years whom he considered to be too unwell.

John Horner, managing director of Models 1, which discovered the models Twiggy and Yasmin Le Bon, said he rarely encountered models who made themselves unwell from extreme diet and exercise regime. “I think I’ve seen two who looked unwell and we needed to have a conversation,” he said.

The Conservative MP Rebecca Harris said the figure of two models in 15 years seemed very low. “I wonder if the industry might be inured to the very thin, and you don’t recognise the signs as well as you think you do,” she said, which Horner’s Models 1 colleague Karen Diamond said was possible.

Diamond said the agency’s “new faces” were given a copy of James Duigan’s book Clean & Lean Diet, which she said promoted a “very healthy, very toned physique which we would all benefit from if we stuck to this regime”.

The agency knew signs of an eating disorder to look out for, Diamond said. “There is a certain skin palette,” she said. “If a girl is making herself sick, she might have bad breath, it could affect her teeth, sometimes you see a downy hair appearing on the body.”

But the former fashion editor Caryn Franklin, who co-founded Allwalks Beyond the Catwalk, an organisation that promotes diversity in beauty ideals, said those symptoms were “the extreme end of eating disorders, models can keep themselves just below the radar”.

Diamond said she would encourage designers to send bigger sample sizes, saying some labels had asked for as small as 33in (84cm) hips, which she regarded as “bordering on being physically impossible – I wouldn’t try to make a girl fit that.”

Different laws have been passed worldwide to try and tackle the issue. Spain already bars models with a body-mass index (BMI) below 18 from taking part in Madrid fashion shows, and models on Italian catwalks must show health certificates under a self-regulation code. The World Health Organisation guidelines state that an adult with a BMI below 18 is considered malnourished, and 17 severely malnourished. The average model has a BMI of 16.

Diamond said she would be open to an age restriction on catwalk models under 18, but cautioned against using BMI to measure health. “Fashion models have a certain physique,” she said. “Most fashion models are under 18 in BMI, that doesn’t make them unhealthy, but it is very difficult to police.”

Nokes, who will now write a report on whether to push for any legislation on the issue, said she was inclined to agree that BMI was not the right way to measure models’ health. “But it’s clear designers and agencies are a million miles away from the general public on this,” she said.

Nelson told the Guardian after the meeting she was frustrated that the fashion agencies, who gave evidence first, had not stayed to hear from the models. “They were not willing to hear personal stories and it shows they don’t expect change to happen,” she said.

Among the models speaking at the session was the plus-size model Hayley Hasselhoff, whose father, the former Baywatch star David Hasselhoff, was watching in the House of Commons committee room.

Hasselhoff said she had not faced the same pressures. “But I heard of models who started at 14-year-old with such small hips, and then at 16 agents said ‘are you slacking off?’ and they would say back, ‘what, no, I’m just growing, I’m developing.’ Girls feel they have to go to extreme length to live their dream.”

Models 1’s Horner said there was very limited demand for plus-size models. “They are paid less than regular models, there is certainly discrimination there,” he said. “The vast majority will work in catalogue, not editorial.”