Meet the women at the forefront of Winnipeg's fashion scene

Meet the women at the forefront of Winnipeg's fashion scene

The Instagram following of one Winnipeg fashion stylist is 65,000 and counting, and a local clothing designer is striving to represent as many individuals as possible in her collection.

Both young women are at the forefront of fashion in the city, yet their approach to style could not be more different.

Bella McFadden, 20, is known online — and around the world — as Internetgirl, a name she came up with when she was 17.

Her followers — many of them eager to buy McFadden's clothing — are based in Winnipeg, New York, Australia, the U.K. and almost everywhere in between.

"I'm … inspired by 90s and cult films, so I have an edge," McFadden told CBC's Terry MacLeod on Sunday, noting her style is influenced by a number of different movies, including Jawbreaker and The Craft.

McFadden's popular online store is set up through an app called depop, where customers can buy items in just a few clicks.

Most of the clothing is selected by McFadden herself, and she finds a number of the garments in Winnipeg's thrift stores.

"I go through thrift shops and I raid them," she said. "I like to find everything from all sections. I wear women's clothes and men's clothes. I also thrift online through eBay and other sources."

Not all those who keep an eye on McFadden's online presence are customers, though.

Marilyn Manson is just one of her fans and Twitter followers.

Vans Shoes is a sponsor and Lugz boots reached out recently — a number of pairs are on the way for McFadden to pose with. New York's Office Magazine featured McFadden in a spread during summer 2015, and Nylon Japan has named her as their "it" girl in an upcoming issue.

Recently, she was contacted by Calvin Klein. 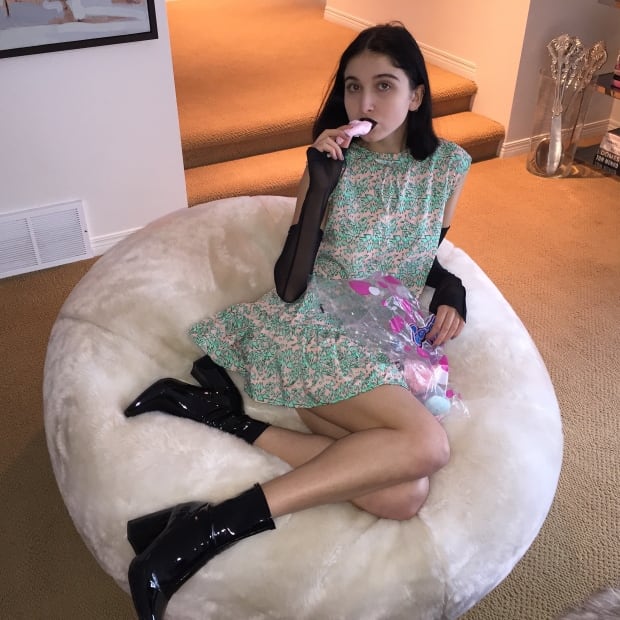 Rachel Jones, 21, says social media plays a key role in the marketing of her clothing brand, William Rhys, but her designs also sell at Berns & Black Salon, where Winnipeggers can get first pick.

"I started my first line doing minimal, basic garments so I could actually see different people within the community wear them and see how they made it their own individual style," she said. "The object of creating my line and making it minimal wasn't necessarily because I'm so into minimal clothing — I think it's an important element — but I created that so I could actually showcase as many different styles and as many different individuals as possible with my line."

Unlike McFadden, Jones's inspiration for William Rhys — her father's middle and first names — comes primarily from fashion bloggers around the globe.

While at CBC for an interview, she wore a T-shirt designed by Karla Deras, a Los Angeles fashion-blogger-turned-designer with a huge online following.

Although the holiday season is only beginning, Jones has already published her spring and summer 2016 lookbook and as is the theme with her brand, she sees her community in the clothes and the clothes in her community.

"The first portion is essentially just about how the fashion world is a mirage and western beauty is not attainable and how individuals … should be our inspiration," she said.

The way she is showing the book is where her and McFadden have something in common.

"I featured them through Instagram and asked, 'Hey, can you style my garment?' And, they did," she said. "They wore it in their own individual style."